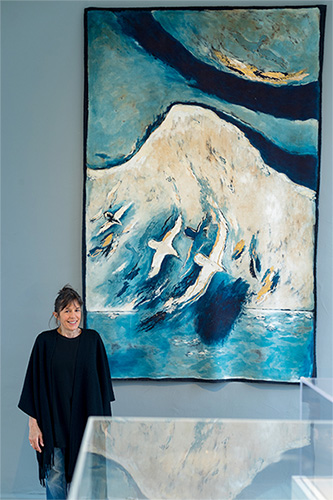 After gaining a First Class B.A Honours degree in Fine Art/Textiles at Goldsmith's college, London in 1984, I have ‘followed my passion’ and continued working as an artist, exhibiting widely in the U.K. Ireland, Australia, Japan, the U.S.A and Spain. I was born in Bristol, England and returned there after my degree to set up a studio, funded by the British Crafts Council. I built my reputation as a Contemporary Textile Artist from the UK before I took the big step of leaving the city life behind when I moved with my young family to Co. Clare in Ireland in 1991. With help from a European Rural Development grant I set up a new studio in an adjoining barn next to our family farmhouse to continue working on large-scale artworks for galleries or commissions.

I am continually inspired by the natural world but in particular birds and their movement within the landscape and coastal regions. I love studying how they move across the sky and interact with air currents and wave motion, or their distinctive characteristic movement as they feed along shorelines or flock to feeding grounds. Drawing is an important part of my arts practice and I regularly draw off the west coast of Ireland in County Clare, Kerry and the Connemara coast. I hope my work helps to draw attention to the delicate balance of nature and the inter-dependence and connectivity between ourselves and our natural environment. I hope that the sense of freedom I try to capture will resonate with everyone that sees it.

I draw avidly from life, this being the starting point for all my work. In my sketches I want to capture the essence of the bird and its movement, a moment in time, a memory of passing movement. These instant, sketched records are the beginning of an idea, which when back in the studio develop over weeks into large-scale artworks in which I aim to keep the sense of spontaneity and freedom of the original drawings.

Birds are a way of exploring my need to feel free, that's why I choose to live in where I do. Birds are not bound by man-made structures; they fly with complete freedom, outside of our earthbound realm. 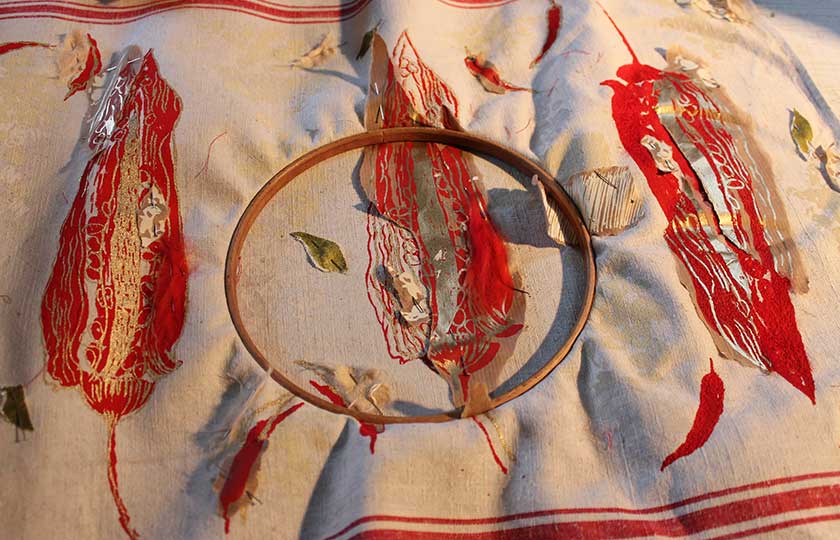 My textile pieces are made by a combination of dying, painting with pigments and screen-printing onto cotton calico and then texturing the surface with various materials, using hand and machine stitch.

I start the piece by dyeing large pieces of calico and transferring drawn and painted images onto silk-screens using a photographic process. The screens and parts of screens are then used to build up layers of images through repeatedly printing and painting the surface of the dyed calico. Sometimes working from both sides of the cloth, subtle textures and colours are built up to create a surface of sequential marks, describing movement and a sense of three-dimensional space. After the printing/painting stage, the fabric is steamed, washed and dried and areas of the surface are selected for dense, textural work. I use machine and hand stitch to apply fragments of Japanese paper, ‘found’ paper (which I hand print), dyed muslin and sometimes bits of silk.

Large, spacious areas of printed and painted surface contrast with small stitched details, representative of delicate birds in their wild natural environment and the contrast between intricate ornithological detail and the vast expanse of surrounding space.